Hi, it’s been over a year since I wrote anything here. Partially it was because I wrote that thing about the New Pornographers and then apparently AC Newman read it, and then I saw them play and talked to him a bit. It was a bit of a shock to suddenly collapse the private/public nature of writing and the internet and music and everything. I felt pretty embarrassed, actually, that he had read it. When I write words, a lot of the time what I’m doing is trying to solidify thoughts bouncing around in my head, coalescing them into words that sometimes fit right and sometimes don’t. But writing them down, you do see if they are working or not. So it’s a personal sort of thing, in many ways, trying to understand how I think or feel about something. But then the internet, you know. It amplifies and broadcasts—complete with the ultra-compression that large media does to content (I mean that in sort of an analogous way to dynamic compression in audio: Loudness Wars!) so the smallest asides are equal in weight and meaning to the largest idea presented. I guess in the end, I was not sure I was comfortable with the thoughts reaching out of my head and being scrutinized outside of the context of my own  mind. And so time went by and I didn’t publish anything word-wise.

Well, and then other things. Anyway, I was just going to update this blog to point to all the music that has happened from my world since. Right after that aforementioned post, Camper Van Beethoven went to play the Winnipeg Folk Festival, our third time there, mostly for the celebration of the memory a friend from there who had died recently. I started to write a tour diary of the experience, and all the music I saw, but I stopped in the middle and there it sat. Oh well.

And then Camper did our 13th Camp-Out Festival in Pioneertown, I came home and worked more on Øresund Space Collective albums I was mixing.

In November I had some difficult travel to Trondheim trying to get there to play with Øresund Space Collective and Black Moon Circle, but I did eventually make it and we did record a lot of music there, none of it out yet. It instilled me with a fear of travel. It is difficult enough to continue holding it together as a musician without the added complications of trying to get somewhere to do what you do when nobody at all gives a shit. Especially those working at airports, or more like the parent companies. They really do not give a shit. I am more and more convinced that in fact there are very few people in the world that actually care at all that I personally should continue trying to be a musician, to make, compose, perform music. Much less write about it. But what the fuck else am I gonna do?

At about this same time, an old disc injury in my lower back decided to not be held back by continuing to do yoga or swim or walk, and I developed an ongoing sciatic problem than started moving constant nerve pain down my legs. Pain is bad. Nobody likes it. I went to the doctor, they just sent me to the physical therapist for ten sessions. That didn’t actually help. 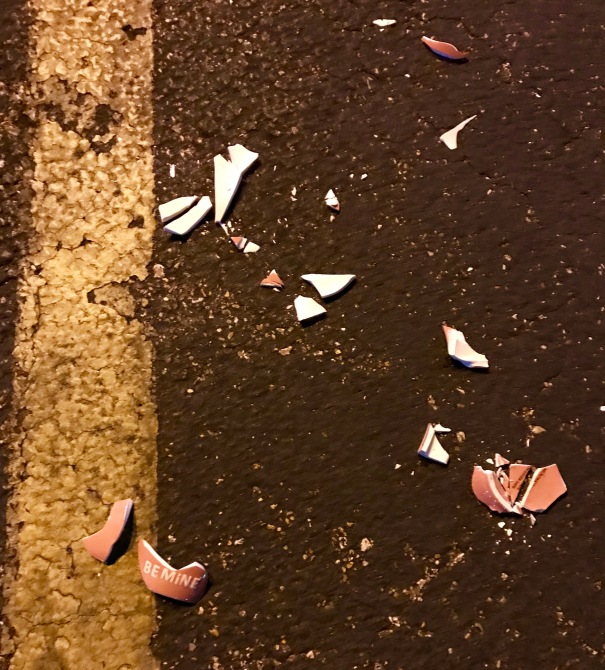 Camper went on tour after Christmas (2017) and everybody got the flu on tour and it was difficult to remember all of it. We played the Camp-In Festival at the 40-Watt in Athens, GA in January (2018) and I do remember that  the Monks of Doom played and that Chris, Victor and I did a stellar improvised set at the Flicker Bar next door.

When I came back I worked on several tracks for various people, and mixing more ØSC and trying to finish Sista Maj recordings. The band was supposed to play in February, but it didn’t happen, and everybody in Sista Maj was busy with their other projects, so the band disintegrated: Mikael Touminen is in several bands, (Kungens Män, Automatism, Fanatism, Eye Make the Horizon) and they’re all amazing. Andreas Axelsson is as well, (Eye Make the Horizon, Lisa Ullén, AAM, etc.) and Per Wiberg had started playing keyboards with us, but you know, he’s just famous! Anyway, I had a number of garage tapes of us, took some to Roth Händle and played with Mattias Olsson, eventually got them all mixed and into collections. I was hoping that one of the labels that does Mikael’s releases would be interested, but they are scaling back of course, so the first of these, “Localized Pockets of Negative Entropy” is out this week on Bandcamp.

In the spring I worked on music for Cid Pearlman’s dance performance called “Bluets” based on text by Maggie Nelson, I composed for 4 -channel dispersion in the UCSC Performing Arts Theater. That was fun, recorded some with Mattias Olsson and made some cool music. We’re waiting on potentially more performances of the piece before I get to release the music.

Here’s a mix of bluet-ish music that was made for background play in the lobby of the UCSC Performing Arts Theater during the run of the show.

In May (2018), ØSC went on tour in Europe (supporting an album called Chatoyant Breath that had just come out—it’s not one I was involved with in playing nor mixing, but that certainly doesn’t mean much, it’s got amazing players! That’s the beauty of having a collective that actually works, I have heard that some members have even played in Copenhagen without Scott Heller (Dr Space)! Anyway, we were touring with Black Moon Circle from Trondheim, whom I had recorded a track for their “Psychedelic Spacelord” album, so Vemund played the guitar with ØSC also on this tour. We cooked, for the most part. The last show on the tour, in Berlin, was recorded in multi track, and I mixed over the summer, it’s out on a limited CD release!

The tour was hard, actually. It was hot, we were in a cramped van with a whining transmission, underfed and underslept, no money. It was like touring in the 1980s. When we were in our 20s. It was much easier then. Scott wrote about it on his blog, so I didn’t have to. Also my legs hurt. but by this time I had actually managed to convince the doctors to do an MRI. They immediately sent me to the back specialists.

The next shows were ØSC in Portugal in late June (2018). Again, I got so screwed by the airlines, all flights cancelled, no way to make the tour, I missed it entirely. At that point I totally gave up.

In July I holed up in the countryside. I tried to record, but I couldn’t find much meaning in it, I ended up rubbing rocks on electric guitars and such. I also played a bunch of acoustic guitar with echoes. Camper Van Beethoven’s bassist, my good friend and co-consiprator Victor Krummenacher came to visit, which was great, and we played a bunch of music together. We recorded some of it. Still thinking about what to do with it. 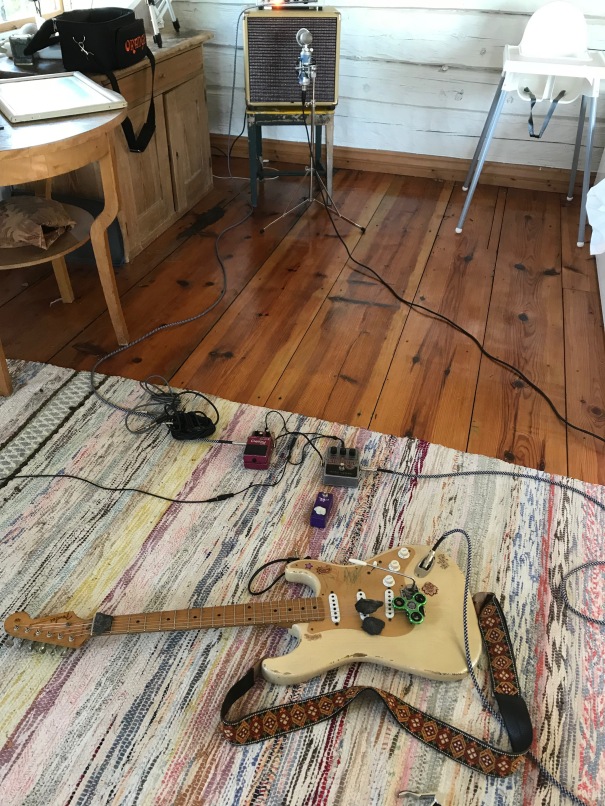 My brother and his family came to visit later in July as well, and after a couple busy days in the city, we also went out to the country and relaxed a bit. Then when they left I went to the back specialists and got an operation where they removed some exploded disc material and scraped away the sides of the bones in my lower back. No more nerve pain. Well, except that I got addicted to Oxycontin for 5 days. Seriously, that shit is despicable, after 5 days I tried to stop taking it and went into the worst black hole a person could be in and still be alive. That took a bit to recover from, but by the time I flew back to California to start a short tour with Camper Van Beethoven, I was only taking Advil again.  And CBD balm (California, still not legal in Sweden.)

Victor and I got to play more acoustic guitars together before the tour started, so we were able to work out what we would do at Camp-Out 14, the following week. Instead of playing the now-normal electric improv set, we did an acoustic space rock set.

It was a rushed two weeks, only a few shows, a few visits. Back in Sweden, now 55 years old (as of Sept 3) I started moving a few collections from SoundCloud to BandCamp, like these, “Artificial Relics” (guitar with electronic music) and “machines” (SuperCollider coded music.)

These machines are all music written in code, in an application called SuperCollider. The oldest ones are the “Cars” pieces, (originally begun in 2001, in Supercollider v.2—this code is too old to run now!) these all use very similar timbres, but for each one I made a graphical interface to control parameters to “play” the synthesized sounds, so each one is a live improvisation: the controls included start/stop buttons for the different types of sounds, and sliders or range-sliders to determine possible sets of choices of pitch, length, time, envelope, even scale elements for the synth process to choose from for the next sound iteration. All of the tunings are Just Intonation, basic major or minor usually, pentatonic or hexatonic scales.

The beginnings of this compositional code were pieces that were to accompany a dance piece by Ellie Leonhardt, as were several pieces on the “Non Linear Accelerator” album (e.g. “Ellie Altair”). The Altair name came from the movie “Forbidden Planet”, which was somehow important at the time, and the “Cars” name comes from the fact that the pieces titled “Breakthrough Cars” were to be played from automobile stereos in a site-specific performance of the dance piece.

As these pieces are contemporaneous to most of the music on “Non-Linear Accelerator”, they also form some basis for much of how we used SuperCollider in the music in Chaos Butterfly. I did perform many of these types of pieces live, some with audio input from violin or guitar, including one memorable computer-only show at the Tonic in New York in 2002 during the very first run of shows by a resuscitated Camper Van Beethoven at the Knitting Factory. I had been invited to play at Tonic by TimeBlind, another SuperCollider composer. During the set, most of the half dozen or so people just sat around spacing out, but about half-way through, a woman came up to me and asked if I were doing the audio or the the video. I told her I was making the sounds.

The “Machine in the Garden” pieces (~2016-2017) are similar machines, they were made in SuperCollider v.3, attempts at a composing a soundscape for Edie Winograde’s film of the same name for museum exhibition.

These pieces use only harmonic series excitations of enveloped pulses, all sets of possible rhythm or pitch (or number of harmonics) choices pre-programmed so the pieces just ran as they were, choosing what to do next when the time came. These are some captured possibilities of a potentially infinite process.

Later this fall the next ØSC album, Kybalion, will come out, with a virtual reality type experience designed by Batuhan Bintas. I’ll keep you informed.

So that’s the last year or so. Maybe I’ll try to write up a few of these events in a more detailed way if I can.

musician. real person. that's my real name, go ahead, look me up.